"You mean to tell me I don't already know this bastard Gołąb is involved in this mess. You must be taking me for an imbecile or worse. Start talking Teuton, and if I find these... bits of information" - his voice dripping with sarcasm "...as interesting as you claim they are, I will set you free. If not you will be treated as suits your conduct."
"The fool doth think he is wise, but the wise man knows himself to be a fool."
― Touchstone
Top

(A) - So, we knew you're coming. We knew your numbers, even your equipment, and where to find you. Yesterday, my men relayed me the news, claiming someone approached them and revealed your plans. Sure I was sceptic and sensing a trap, so we proceeded carefully. You know the rest, your unit was slaughtered. You were to die, too. And here we are. But you know, I was really curious about who betrayed you. I gathered all of our informers in the area and they interrogated others... To put it shortly, the recurring theme was that a knight wearing your colors was seen, traveling with a small team. Some say he encountered our soldiers, but presented some kinds of documents and was not harassed by anyone. Well, this is probably everything I know, didn't have time to investigate further.

Benedykt listens to the Teuton and remains silent for a seemingly endless moment.

(B) - This is very important information. Do you swear by the All-Mighty God that this is true?
(A) - I swear, this is what my men told me and what I was able to establish yesterday.
(B) - How did you establish that?
(A) - As I've said, we have a network of people working for us. They're trusted men. And exactly four of them testified independently that they've seen this knight, with a small unit of guards.
(B) - Meaning that you could testify under oath what you just said if asked?
(A) - Yes, I could.
(B) - Do you understand what that means?

Benedykt looks hard at the Teuton, then starts speaking again.

(B) - You just confirmed what I already knew. That my uncle who usurped my title and lands is aiding you Teutons in this war just to get me out of the way. Which means he is a traitor to my King. I must point out that this information you just provided to me makes you a traitor to your Teuton masters. There are two ways you could play your cards in this situation. The first would be to give me a signed and sealed testimony of what you just said. then I'll let you go as you please. You, provided you reach alive your camp, will have to deal with all your enemies at court who will exploit this treason of yours, imagined or true. The second option is to accompany me and testify in person what you just told me. This will give me even stronger leverage than a written testimony in rallying the lords against my uncle. And will provide you with my gratitude. I won't tell you what to do. It's your decision. Even if I suspect that under this light, its in your best interest that you stay by my side. You see, we Tarnowski are powerful friends. And you Albrecht are in dire need of friends right now. Think it over. You don't have much time.
(A) - I've been in opposition to the Grand Master and most of the Council for... I don't know, now that I'm thinking about it, for years probably. There were times when they wanted me dead and tried to assassinate! I just don't know, who exactly and I couldn't prove anything. Now we'd just add another point on the long list of our... quarrels. But given my condition, I would not like to risk a solitary journey back to my camp. I'll go with you. But as a free man.
(B) - Should you accompany us as a free man, you invite every one who sets eyes on you to put an arrow in your back. If you are presented as my hostage no one will dare laying a finger on you. These ropes will serve you as better armor than any steel plate ever could right now. I have given you my word of honor that you will live as long as you act upon your word and won't insult me again. My word stands. Don't let your pride get the better of you.
(A) - Fine. Whatever. It couldn't be much worse anyway.
(B) - Trust me. It could be much worse.

-- Benedykt makes an imperceptible glance towards his squire which only Albrecht can see.

Close to the sunset, the party arrived at the main camp north of the city Lautenburg. The camp was set up around a small hill atop which the King Jogaila and his court resided in their tents, along with the Grand Duke of Lithuania Vytuatas and his men. And the camp was enormous, with thousands and thousands of riders, knights and their squires and pages gathered around their banners, accompanied by servants, camp followers, prisoners ... Poles, Lithuanians, Moldovians, Tatars, Czechs, Germans ... cooks, woodworkers, blacksmiths, courtesans... and even more horses, and then a neverending (apparently) stream of carts and wagons carrying food, tools, weapons, armors and all other provisions. Surely, it must've been a gargantuan task from the logistics points of view, but up to this moment everything was going just fine. The morale was high and one could almost feel the excitement in the air.

The arrival of Benedykt and his men aroused the interest, but there was no time for talks and explanations, as first they had to take part in the most crucial ritual of the day: grooming. This is how people called the daily inspections in search of fleas, lice, ticks and other insects, but also any signs of disease. They were usually performed by servants or prisoners, supervised by physicians. There were many stories about what happens when they find something, but nothing was certain. And so the party was split, with Benedykt and Albrecht heading to a tent where nobles where examined, while Aleksy, Adrian and Izajasz had to pass the inspection outside. Fortunately it wasn't cold and soon they were free to go. 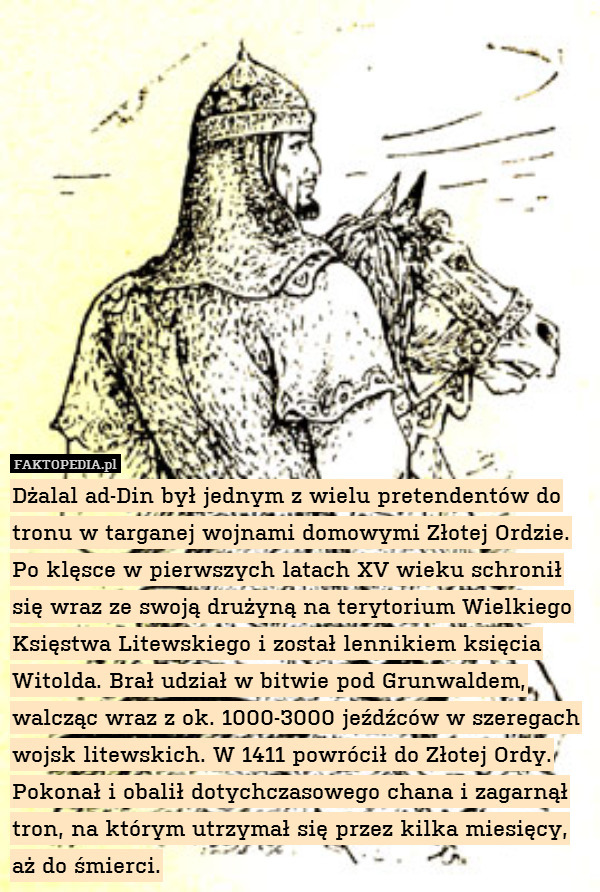 "My name is Jelal Ad-din and I'm the strongest! Are there no more challengers? Do you think you can overpower me? I don't think so" he bursts in laugh.
He's standing in the middle of an improvised contest area, surrounded by a crowd, while two other fighters are already defeated, one of them sitting on the ground and rubbing his shoulder. Izajasz can hear someone saying that Jelal is the leader of the Tatar units and vassal of the Grand Duke.
Top

Aleksy has seen this sort of thing before. "Grooming" is traditionally the time when idiots and braggarts run their mouths off. Aleksy ignores the Tartar and waits for his inspection to complete.
GLENDOWER
I can call spirits from the vasty deep.
HOTSPUR
Why, so can I, or so can any man;
But will they come when you do call for them?
Top

"I'll need something you're... suprisingly skilled at to do it though. Don't worry, you'll get compensated if I- We pull this off."
Top

Having filled Izajasz in on the scheme, Adrian moves back into the crowd and manages to bring some interest in doing gambles around the fight.
Top

Izajasz warily steps into the ring, giving Adrian a somewhat irritated look. In his mind it was too late to back out now."I'll take you on." He says, removing his equipment and passing it off to Adrian. He stands in front of Jelal, and stretches his arms.
"Nice to meet you." Said the man with the red hands.
But the man lied.
Lied through his teeth to a mirror.
Top

Jelal nods his head at Izajasz after he's finished stretching. At soon as the fight starts, the two men circle each other, neither willing to step in and commit to a grapple just yet. Izajasz finally loses patience and goes for his arm, but the Tartar nimbly moves out of the way. Irritated Izajasz taunts him: "Isn't this wrestling? Or do you think we're dancing."

Jelal responds: "Oh you know, I just need to catch my breath from my previous fights, I'm just an old man after all."

Izajasz retorts: "Ha! You didn't seem this tired earlier when you wanted a challenger! Has my appearance frightened you?"

This appears to strike a nerve in the Tartar who rushes forward, and grabs Izajasz's arm. Izajasz, prepared, drops his stance lower as the Tartar attempts to throw him over his shoulder. Having none of that, Izajasz wraps his arms around the man's midsection and launches backward.

Jelal desperately tries to pull his weight, but his feet had already left the ground. His eyes go wide and mouth agape as his head buries itself vigorously into the mud from a brutal suplex. There's a moment of silence after Izajasz's victory... the crowd seems stunned.
"Nice to meet you." Said the man with the red hands.
But the man lied.
Lied through his teeth to a mirror.
Top

"What a suprising turn of events! Too bad for you, next time gentlemen" Adrian says, taking his winnings and moving towards Izajasz before the crowd can recover.

"Hah, you'd wish don't you. Do not worry though, I managed to get some ridiculous rates for this fight, so you're getting your due."

"I don't recall you doing the wrestling, friend" Izajasz says. "I actually don't even remember agreeing to this"

"Exactly." Adrian hands Izajasz share to him, which is accepted with a grumble, but before they can make themselves someone interrupts.
Top

Aleksy looks at Izajasz bemusedly. "Always the same with those schemers. You do all the work, and they take the bulk of the reward."
GLENDOWER
I can call spirits from the vasty deep.
HOTSPUR
Why, so can I, or so can any man;
But will they come when you do call for them?
Top

Izajasz frowns, but says nothing.
"Nice to meet you." Said the man with the red hands.
But the man lied.
Lied through his teeth to a mirror.
Top

Jelal had to think and think fast.

"... and this is why earlier this day I chose this man to be my personal guard! I wanted to show you his incredible abilities. A companion of unmatched strength for Jelal Ad-din! POWER!"

The Tatars in the crowd are celebrating wildly, while Jelal is encouraging Izajasz to introduce himself.
Top

Trapped, Izajasz steps towards the crowd and introduces himself as Izajasz Dabrowski. He looks almost sympathetically towards Jelal, and decides to stick with the ruse.
"Nice to meet you." Said the man with the red hands.
But the man lied.
Lied through his teeth to a mirror.
Top

Jelal grabbed his arm, lifting it high into the air and smiling broadly to his people, while whispering to Izajasz:
"You better serve me well"
Top

While Izajasz and Aleksy had to pass the sanitary inspections outside, those of noble blood had the privilege to do this in the comfort of heated tents, where they could even take a quick bath.

"Cousin! What a surprise!"

Piotrek "the Bigtoe" Tarnovius was just inside, happily naked with just a cloth around his hips, when Benedykt and Albrecht entered. For some years Piotrek and Benedykt were growing together and they were both enjoying this time. Benedykt also recalled that his ever smiling and courteous cousin had a seemingly innate ability to decipher unknown texts, copy documents, forge wax seals and all sorts of such manipulation.

"I've heard they've placed you in the reconnaissance duty, how are things going? Oh, pardon me, I see you're not alone..."
Top
Post Reply
119 posts

Return to “The Storm”